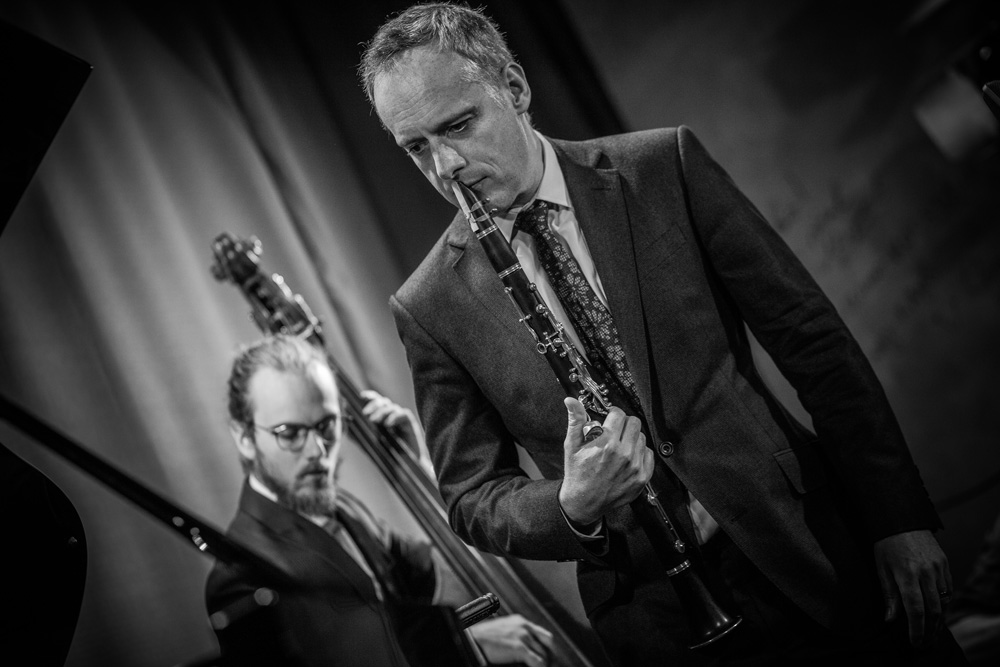 David Horniblow is one of London’s most in demand jazz clarinet and saxophone players. He has performed and recorded with all of the top British jazz names and acts – from Chris Barber, Acker Bilk and Kenny Ball to Jools Holland and Jamie Cullum – as well as international stars including the 11 time Grammy award winning music legend George Benson. Initially studying classical clarinet at the prestigious Guildhall School of of Music and Drama in London, David rapidly became involved in Jazz and has specialised in it ever since.

David has played regularly with numerous bands in London including the BBC Jazz award winner Keith Nichol’s Blue Devils and the Pasedena Roof Orchestra, as well as playing in West End shows including Jersey Boys and Matilda, television period dramas and national and international radio. He has played at many top concert halls and Opera houses throughout Europe, the Unites States and Australia as well as legendary jazz venues like Ronnie Scotts.

Now focusing his attention on The Dime Notes and the Vitality Five, in which David plays bass saxophone, he is committed to immersing himself in the styles of the early jazz clarinet pioneers, including Johnny Dodds, Omer Simeon and Sidney Bechet. He is also keen to dig deeper into the tradition and explore much less well known players of the 1920s and revive their styles. His aim is to meld these influences into his own style, drawing on the energy, fluency and drive of one of the most exciting periods of Jazz..

Nothing short of spectacular
MICHAEL STEINMAN – JAZZ LIVES. USA
A terrific Clarinettist! From one player to another
ACKER BILK. UK
Horniblow’s playing is nimble, incisive and assured
HUGH RAINEY – JAZZ JOURNAL. UK
this man blows a real mean horn with virtuosity, passion, and taste, a formidable and rare combination
JEFF BARNHART
a top young player… Takes it all in his stride
KENNY BALL. UK 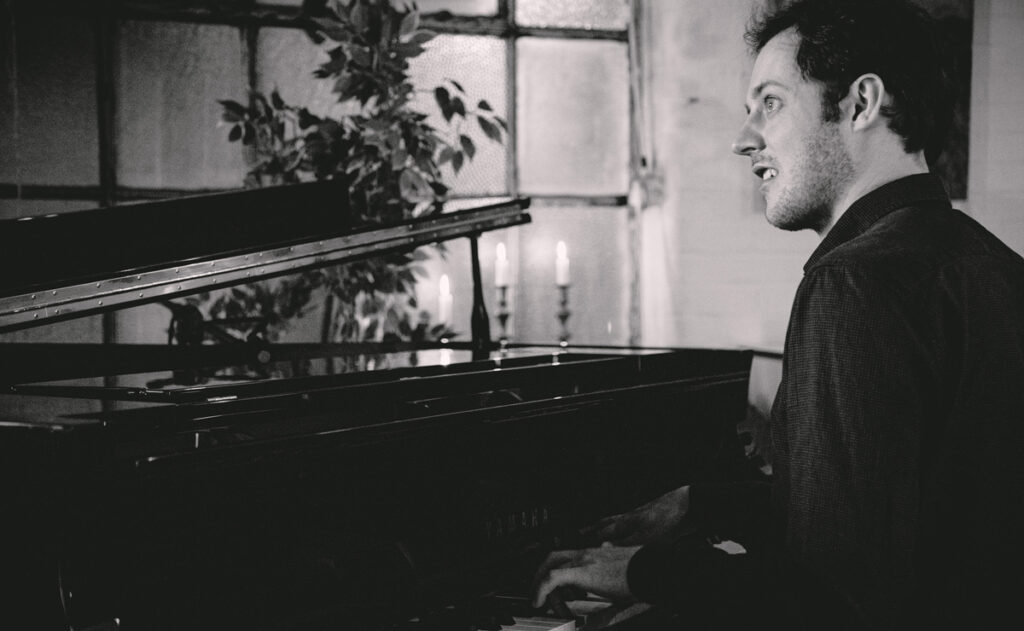 Sam Watts is a pianist and composer specialising in Brazilian music and Jazz. Born in Birmingham U.K, he began playing at the age of 6. After taking an interest in improvisation and jazz as a teenager he eventually went on to study with scholarships at both Leeds College of Music and the Royal Academy of Music, where he won the Humphrey Lyttleton Prize. His early influences were jazz pianists such as Oscar Peterson, Herbie Hancock, Bill Evans and Erroll Garner, although he has always maintained an interest in classical music as well, and has extensively studied classical composition, counterpoint and orchestration.

He is an established jazz pianist and has worked with artists including Jean Toussaint, Jason Miles, Jason Marsalis, Abram Wilson, Ray Warleigh and Judi Jackson. He has performed internationally at numerous jazz festivals and concert venues, including performances at Wigmore Hall, Symphony Hall, A Love Supreme festival, Paris Jazz Festival, Ronnie Scott’s jazz club and the Royal Albert Hall, often performing his own compositions. He has also made live appearances on BBC Radio 2 and 3 and has recently toured in all over Europe and further afield, including recent appearances in South Africa, Brazil and Malaysia.

His playing style, while rooted in jazz improvisation, crosses many boundaries, including classical and romantic harmony and rhythms from all over the world. He is known for his specialisation in Brazilian music, and performs with many great Brazilian musicians living in Europe, including Marcelo Andrade, Luna Cohen, Jurandir Santana, Luiz Morais, Monica Vasconcelos, Adriano Adewale and the group ‘Hermeto Hermeto Hermeto’. He has travelled to Brazil twice, performing and exploring the musical culture, and in 2017 he was a guest lecturer at UFBA (University of Bahia) in improvisation. He has also taught at the prestigious Trinity College of Music (London) and for the National Youth Jazz Collective (UK).

In 2017 he released his debut album “Mime Music” on the SPARK! Label. The music was described by pianist Liam Noble: “This music alternates wildly between moods, pastoral tangos and rags shot through with wild noise and colourful textures, and string melodies holding the whole thing together”. He has also appeared on numerous album recordings, and in 2017 collaborated on 2 projects as musical director with producer Jason Miles (Miles Davis, Marcus Miller). As a composer he has written a lot of music for film, and has performed several of his original silent film scores at Wilton’s Music Hall in London as well as other venues around the U.K. His compositions have been broadcast on BBC radio 3 as part of the BBC proms, and one of his piano compositions was recorded for international CD release by concert pianist Natalia Strelchenko.

His current project “Curimba Trio”, featuring Jurandir Santana and Adriano Adewale, performs compositions of the band members which combine traditional Brazilian rhythms with an energetic, improvisatory jazz approach to performance, as well as re-examining music by composers such as Egberto Gismonti and Chico Buarque.

“I have heard many of the new breed of young players on the jazz scene. To me Sam Watts is at the head of the class.. He is more than just a player with great chops. His playing is both lyrical,focused and extremely creative. I have worked with him and was extremely impressed with his professionalism and his ability to lead a band yet also blend into the proceedings. A great arranger as well… The future is extremely bright for him” 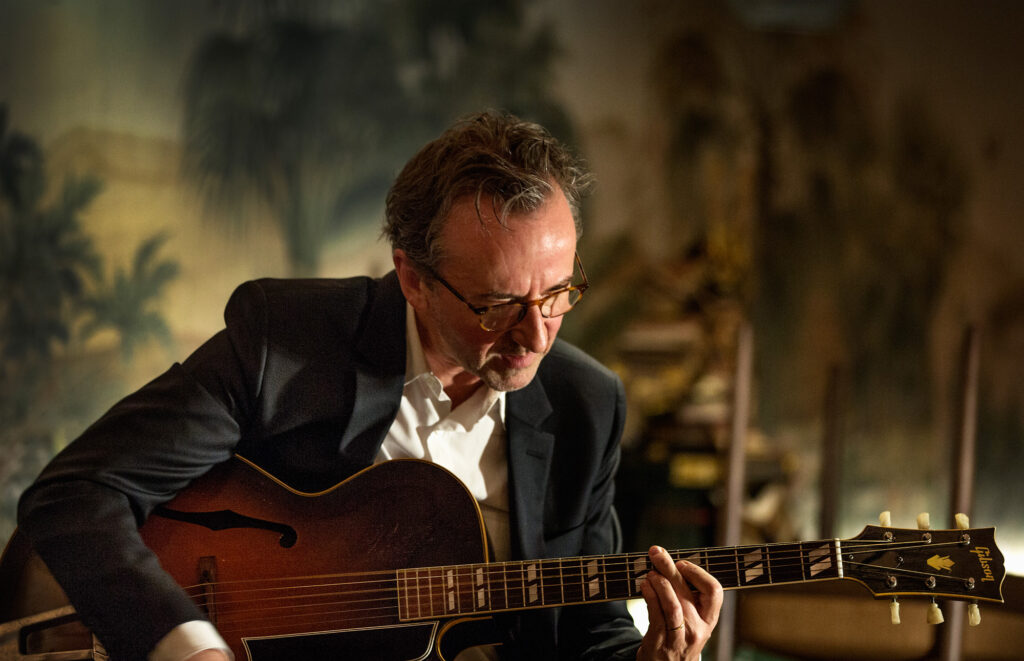 Over the last 20 years London based Dave Kelbie has been a prominent accompanist to many of the world’s leading jazz soloists and European Gypsy musicians.

A self taught guitarist, Kelbie’s professional engagements started with the celebrated Gypsy guitarist from Holland Fapy Lafertin and the UK based quartet Lejazz in 1989, a partnership which has continued to the present day with CD releases on Lejazzetal Records including ‘Swing Guitars’ and the highly acclaimed Hungaria’, and with tours as recent as 2017 in an ever growing number of projects. Through his lengthy alliance with Lafertin, Kelbie became rhythm guitarist to most of the eminent Gypsy guitarists of their time including a five year stretch with Lollo Meier, performances with Bireli Lagrene and Angelo Debarre with whom he toured for seven years, releasing two highly admired albums on Lejazzetal Records.

In the world music arena Kelbie has worked with Kal from Serbia, The Original Kocani Orchestra from Macedonia, Hungarian violinist Roby Lakatos, and a number of projects partnered with Tcha Limberger, The Budapest Gypsy Orchestra, Kalotaszeg Trio, and Trio Tatavla. Within this field his groundbreaking UK based, multi-national Balkan music cooperative Szapora has been his best known project. The band received much praise for it’s concerts throughout Europe and consistently featured some of the finest UK musicians such as Christian Garrick, Dylan Fowler, and Eddie Hession. Szapora has released three CDs on Lejazzetal Records.

Through the recent project with New Orleans clarinetist Evan Christopher and Django a la Creole Kelbie has become one of the most sought after rhythm guitarists on the worldwide stage. He continues to work in the rhythm guitar seat with UK guitar legend John Etheridge (ex of The Soft Machine), Tcha Limberger’s Trio with Mozes Rosenberg and more recently the very hard swinging vintage jazz group from London The Dime Notes with Portland pianist Andrew Oliver.

the rhythmic rumbling of a folksy freight train
RAUL DA GAME – ALL ABOUT JAZZ. USA
Kelbie with a remarkable rhythm on his guitar delivers an impressive performance
HOLLY MOORS – MOORS MAGAZINE. HOLLAND
propulsive rhythm guitar
KENNY MATTHIESON – INVERNESS COURRIER. UK
Dave Kelbie’s rhythm guitar is undoubtedly one of the best in the world
JOHN PIERRE JACKSON – CLASSICA. FRANCE
Kelbie is the motor tonight, providing a strict, subtle pulse – whatever the tempo
JOHN WALTERS – THE GUARDIAN. UK
Kelbie maintains the pulse flawlessly at any speed from zero to a hundred and twenty
IAN MANN – JAZZMANN. UK
Sweet Chorus is propelled by the partnership of the guitarist Dave Kelbie and the bassist Malcolm Creese
CLIVE DAVIS – THE TIMES. UK
The Rolls-Royce and Jaguar of British rhythm sections
SEBASTIEN LEGE – DJANGOSTATION. FRANCE
Dave Kelbie produced such a solid percussive rhythm you could hear why the original Quintette didn’t use a drummer
KEITH CLARK – CRACKERBOX. UK
Dave Kelbie’s rhythm guitar is a joy in itself, firm but relaxed, clearly executed but never obtrusive. Dave knows exactly the best chord voicing for every moment and will add spice with the occasional flourish or series of brisk arpeggios reminiscent of Eddie Lang.
CHARLES ALEXANDER – JAZZWISE. UK

Louis Thomas grew up in Devon and took up the double bass aged 16. He immediately developed a great enthusiasm for the instrument and very soon began gigging professionally. A few years later he moved to London to study jazz at Trinity College of Music.

Over the years he has been involved in a very diverse range of projects. He was a founder member of The London Soundpainting Orchestra – a collective of musicians and dancers which explores live composition using sign language. He toured with the Neil Cowley Trio, which included a trip to Sudan with the British Council. He performed with Trinity’s Contemporary Jazz ensemble at the Queen Elizabeth Hall, and took part in a performance John Cage’s ‘Musicircus’ at the ENO. He has recorded for radio 3 on numerous occasions and has performed as part of the BBC Proms Lates with two of his bands – Southern Cone Quintet and The Old Hat Jazz Band. Louis has also been involved in many various collaborations with contemporary dance, including a performance of Charles Mingus’ ‘The Black Saint and The Sinner Lady’ which was re-worked to include original choreography.

Initially through his work with The Old Hat Jazz Band Louis became very active on London’s early jazz and swing scene, and is now highly in demand – he is also currently a member of The Dime Notes and Wheatley’s Acadians, and freelances extensively with many of the other top bands and musicians on the scene.